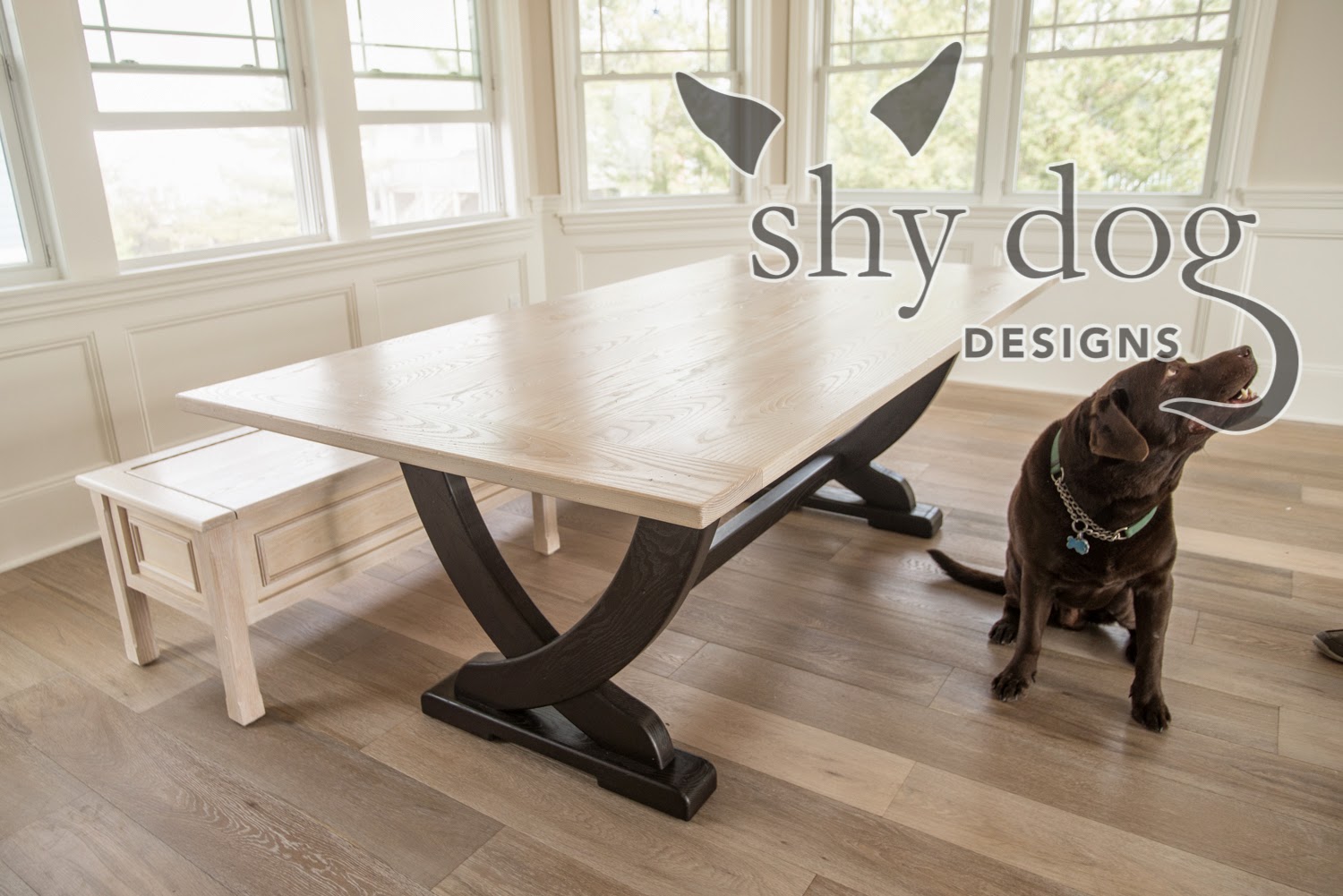 (With special thanks to Susie Sefcik Photography for the beautiful installation photos!)

When we started collaborating on this table, my customer had some definite ideas about how she wanted the legs to look.  The hardest (and most rewarding) part of custom building is finding a way to bring someone’s imagination to life.  In the end, there were probably a few dozen tweaks and variations on the design before we reached the final product, but it was great working with someone who could give direction and examples of what she wanted.  And in the end we created a set of table legs that I feel confident doesn’t exist anywhere else in the world!

The other great thing – as a designer/builder – about collaboration, is that it forces you to explore styles and forms that are outside your normal parameters.  Nothing makes you a more complete craftsman than finding ways to build things that haven’t been built before in a style you don’t often pursue.  With the great response we’ve gotten already, I suspect these sweeping, interlocking legs are going to become big part of my repertoire in the future.

Finding an appealing curve was only step one.  Next was incorporating a stretcher between the legs that is much lower than normal, keeping it closer to foot rest height than you might see on a typical trestle table.  This meant moving the intersection of the legs down and adjusting their final angle a few times until it was just right.

I’m really happy with the way these ended up.  From a technical standpoint, cutting and routing out the half lap joint was definitely a challenge, but it also made for the very best combination of strength and aesthetic value.  I love that the legs look like they’ve almost grown together and I think it gives the table a very organic feel.

Attaching the legs to the feet and table braces required a riff on thru-tenons.  Normally, thru-tenons are something I like to show off as part of exposed joinery, but for this table they are purely functional.  They provide a large amount of structure to join the legs to other sections of the base.  We could have gone with heavy lag screws alone and been fine, but – for us – “good enough” is never good enough.  I feel that it was definitely worth the effort to have wood structure passing through each piece to really lock them together.  The extra time it took to make these mortises and floating tenons gives me total confidence in these joints lasting a long time.

The stretcher between legs is held in position with half-glued floating tenons and “Zip-Bolts” from Lee Valley.  These are almost completely hidden from view when installed and help pull the stretcher tight when in use, while still allowing the base the be quickly disassembled for moving or storage.

The table top itself is nearly four feet across and almost eight feet long, plenty of room for a big dinner (or very elaborate and heated game of Risk!)  Relative to the base, it’s built fairly traditionally, crafted  from solid ash, with breadboard ends.  Each of these end caps is attached with “loose” tenons and half-glued dowels.  The boards themselves help keep the table flat, while the dowels allow the center of the table to expand and contract across the grain with changes in temperature and humidity.  It’s always important to allow for wood movement (because it’s going to happen whether you remember to plan for it or not!)

The top and legs received the same “distressing” as the bench, though we went a little lighter on the legs and a little heavier on the table, hopefully anticipating the right proportion of wear that each can expect to receive in the future.  And while the top got a stain to match the bench, the legs got a beautiful deep brown wood dye (“Espresso” by General Finishes).  Each was then followed with the same hand-rubbed varnish and paste wax buffing.

In the end, it’s hard to say goodbye to this piece.  It was really enjoyable to build and I’m hoping it will be even more enjoyable to use.  (And just be sure, myself, my father and Fern – the original “Shy Dog” – gave it a quick test ride!)  I hope its new owners have a great time making memories around this table for years and years.