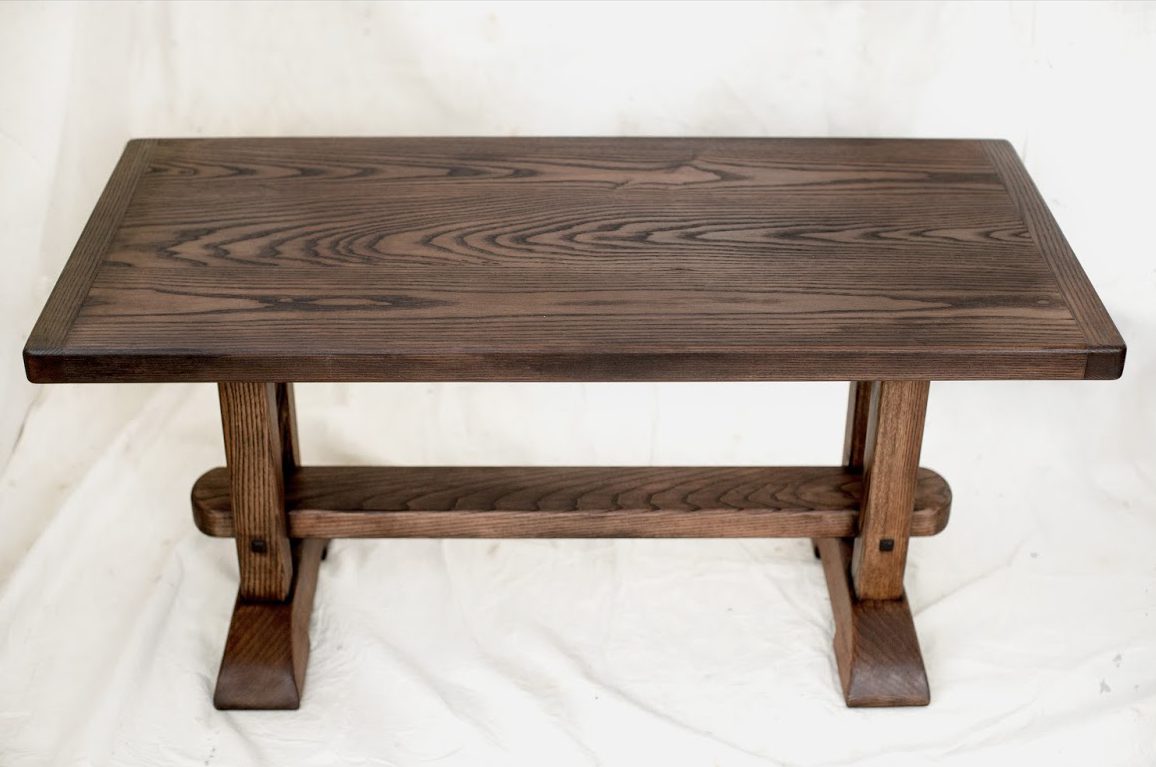 About a week ago, we were approached about a donation for the Monmouth County Historical Association’s “Tavernfest” auction.  With my wife and I having just hosted our wedding reception at the historic Taylor-Butler House in Middletown, NJ – a venue owned and managed by the MCHA – we were happy to provide a donation for auction.

At first, our inclination was to give one of our completed pieces from inventory.  But, with a few open days in the schedule before the event, we thought it might be fun to craft something that would pair thematically with the event.  After a little brainstorming, we developed the idea of a tavern-style coffee table that would look to be right at home in the 18th century building where the auction is going to be be held.

For this project, we really wanted the piece to be sturdy and heavy.  Something a tavern owner would have felt comfortable using on a daily basis during the colonial period.  Something that would endure use (and occasional abuse!) with ease.  As such, ash was a natural choice.  It’s incredibly dense and strong (some early car manufacturers built frames from it!) and has a grain pattern very similar to oak.  Provided they could get their hands on it, I’m sure my 18th century carpentry predecessors would have found it quite acceptable for use in this capacity.

Construction-wise, it’s a relatively uncomplicated piece.  While I was quite happy to use modern tools like a power jointer and table saw, none of the joinery used would perplex a furniture maker from 1750.  Legs are fitted into the feet and upper support with mortise and tenon joints while the trestle is joined with a simple (though very precise) half lap.  The hefty 1.5″ table top itself is a glued up slab of ash fitted with what are known as “breadboard” ends.  The grain of these end caps run perpendicular to the main section and help keep the table flat through seasonal and humidity changes.

One of the things that separates heirloom furniture from a good deal of mass produced work is the use of solid wood throughout.  But using solid wood introduces the potential for movement, something that doesn’t typically occur in engineered products like particleboard and plywood.  When attaching the breadboards ends, we accommodate wood movement by joining the wood with floating splines and tenons that are only glued on one side, leaving the other side

free to “float” as the wood naturally expands and contracts.  Wood screws hold the pieces together by being sunk into oversize holes that allow for seasonal movements.  Precautions like this are why you may feel small ridges between joints based on the time of the year, but also why you should never experience cracking as a result of atmospheric changes.  Screws are eventually covered up with shop-made, faceted wenge plugs that give the table just a hint of ornamentation.  (In fairness, this is one of the few incongruous pieces of the table.  Most 18th century joiners would probably NOT have had access to sub-Saharan African woods like modern woodworkers do.)

Traditional splines (and modern floating tenons.)  Ok, so maybe 18th century joiners didn’t have access to a Festool Domino…but I’ll bet they would have loved it!

To give our table an aged look, the legs and base were dyed, sanded back to leave high contrast in the deeper pores of the grain, and then treated with a wiping stain to turn the very light ash into a deeper brown finished piece.  Once dry, the entire piece was coated with shop-mixed shellac, a finish that would have been right at home on an 18th century joiner’s bench.  (Though in deference to our time constraints, we opted to spray it vs. traditional hand rubbing.)  The final step was a simple furniture paste wax to afford the piece some renewable protection.

Overall, this piece has a different aesthetic than the pieces that normally come out of the Shy Dog shop, but we’re quite pleased with it.  It’s built to last a lifetime and will hopefully find a good home while raising some money for a great organization!