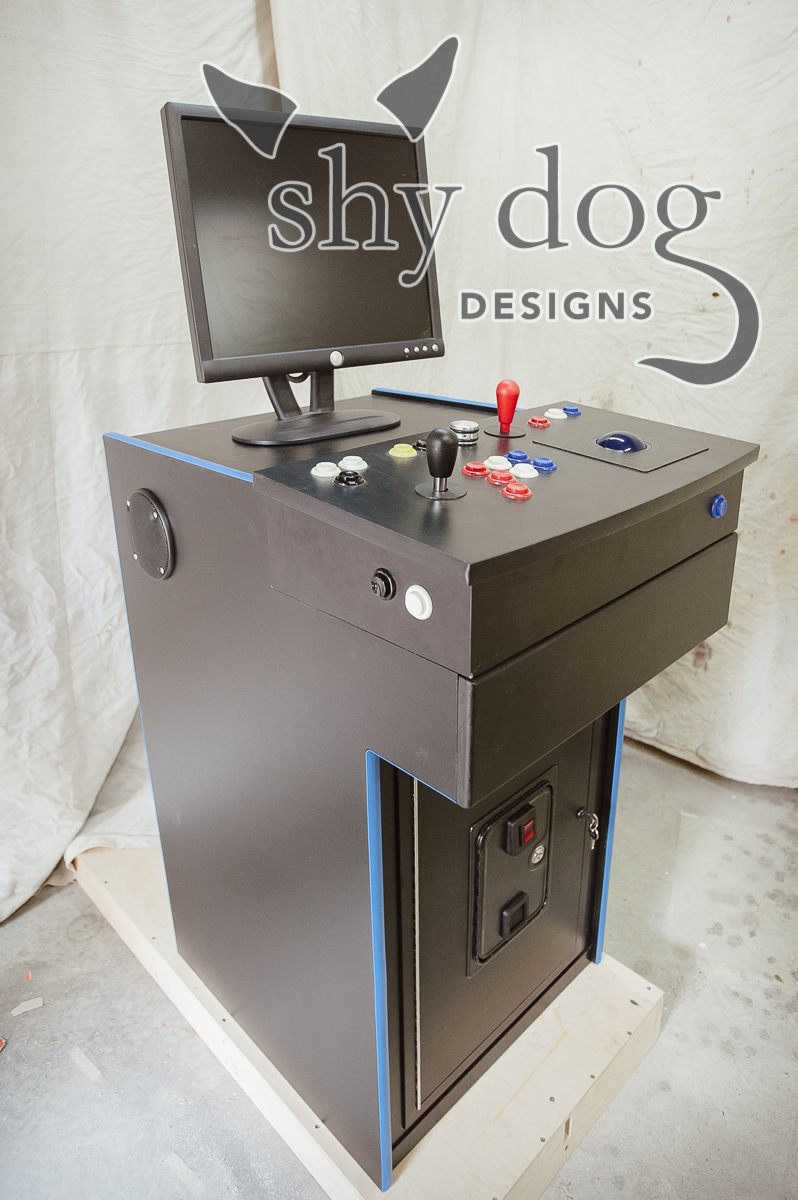 Just like our last custom build, the “Esther” Table, this project came from a client who wanted something made that didn’t exist anywhere else in the world…though that’s pretty much where the similarities between these two projects end!

In this case, the client had already built a very cool custom game controller from vintage parts. The controller has the ability to play a whole host of old arcade games with the original joystick/trackball/paddle/buttons via a modern tower computer and screen.  The only thing missing was a permanent home that would complete the look and feel of full-size arcade machine.

In this case, the client had already mocked up almost exactly what he wanted the cabinet to look like.  He forwarded me a SketchUp file that gave me all the needed dimensions, then dropped off the controller and speakers so I could built to fit.

Overall, I made a few tweaks to the design to allow grooves and dadoes for strength and give it a few nice details (like a faux frame for the door) but the design stayed basically the same from the outset.

In terms of construction, this project was a lot closer to production cabinetry than it was to tradtional furniture.  As a small shop, we don’t have a CNC machine.  Apart from being big (and VERY expensive) they’re just isn’t a lot of call for their capabilities when it comes to the type of furniture we typically build.  But it sure would have been nice to have here.  Once we finally got the cabinet carcase laid out and routed, it sure looked like it had come off a CNC table!

Once the main panels were cut, we crafted top, bottom, front and back panels.  The front features a door-within-a-door with a traditional arcade coin slot.  The large door opens large enough to accommodate adding the full-sized computer that powers the games, with a long piano hinge adding strength.  The back panel features holes for cabling and routed slots for air cooling.  The bottom panel also has small holes to promote air movement through the case and cool temperatures for the computer.  Holes for internal speakers were added near the end of construction.

One fun detail was use of colorful, plastic T-molding along most of the exposed edges.  Not only does this afford a good deal of protection to wood edges, but it also completes the “arcade” look of the entire piece.

The controller itself sits over a keyboard drawer outfitted with Blum soft-close slides (my personal favorite for this application) and a discrete recessed grooved pull under the bottom lip.  Two stub tenons protrude up from the the shelf and mate with mortises routed into the bottom of the controller, locking it in place for gameplay.  There’s also an option to add”butterfly” latches in the future for extra security if need be.

Once everything was fit, assembled and sanded, we primed and sprayed with a semi-gloss black to match the existing controller and give it a look that would be right at home in a 1987 pizza parlor!